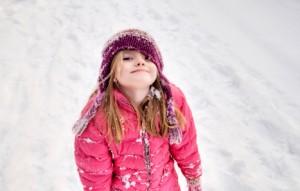 My daughter is obsessed with snow. She absolutely cannot wait for the possibility of it. She asked me recently how snow is made…I told her that when it starts to get rainy and it’s really, really cold, then the rain turns to snow. (A meteorologist, I am not.) So any time it’s cold and rainy now, she expects snow.

We were leaving a friend’s house the other day and she was mad about having to get in the car…she wanted to stay outside. When I asked why, she said that it was going to rain soon. I told her, “Baby, it’s going to rain, not snow. It’s not cold enough for snow.”

She hopped in the car, and then looked me in the eye and said, “Mommy, are you God?” Puzzled, I replied, “No, God is God.” She looked at me smugly and said, “That’s right. And God makes those decisions, not you.”

Rebuked by my four year-old.

After a humbling drive home, I realized how much truth her words spoke to me. God makes those decisions, not me. And not just about snow.

As I’ve pondered over that little exchange with her, I began to realize I have been making a lot of my own decisions lately. Not intentionally or maliciously…they have been innocently made, based on logic, wisdom and reality. They’ve been made with “common sense.” Yet in the process of walking out the events of the past year, I have made decisions about the outcome of all of it. I put God in my box. My little, unbelieving box. And God…gracious, tender, sweet God…let me make my own decisions.

Last year we planned to get pregnant on a trip to Italy. We thought we were finally ready, and the timing was perfect. And it happened. The conditions were right for snow. And then I miscarried.

After I recovered from the miscarriage, I thought I would bounce right back to normal after two weeks off. I figured I had enough time to grieve. And as soon as I went back to work I shelved every emotion and moved on. Too warm to snow. And then I suffered from depression for about six months.

We decided we were ready to try again. And we did. And it happened. And I thought the conditions were perfect for snow. And then I miscarried again.

Other events recently have begun to swirl around me like a tornado. I’ve gotten swept up in it. I’ve been swayed like a reed. I’ve tried to determine the outcome. It’s raining, but not cold enough for snow.

But finally…praise God for finally…I’m starting to get the message God has been trying to send: Stop telling Me what to do.

I am not accusing God of causing these negative outcomes. Life happens. But in my quest to figure out what God is trying to say in the middle of it all, the message to me is now clear: “Stop deciding whether or not it can snow. I, and I alone make those decisions. My job is to make snow. Yours is to simply enjoy it when it does.”

I’m prayerful about everything, but I honestly have to say I don’t know that I’ve been prayerful enough. Sometimes it’s easy to be hyper-spiritual and use it as a crutch to avoid making decisions. But sometimes…well, sometimes it’s just easier to rely on wisdom alone and take action when maybe all that’s needed is more prayer.

I find it ironic that God used snow in this lesson from Jaana. Her birthday is in February, and when I was pregnant with her it was unusually cold in February for Georgia. Like Jaana, I’ve always loved snow, and moving from Washington to Georgia, I missed winter. So the last few weeks of pregnancy, I prayed and prayed that God would make it snow when she was born.

She was born at 9:58 pm on February 25. And by the time they moved us into our recovery room, just before midnight, Greg pulled back the shades and said, “Honey, look.” I looked, and it was dumping snow. I mean dumping! There was so much snow that schools and offices were closed the next day.

I have gotten so caught up in logic, reality and circumstances that I have truly forgotten that God is God. I don’t know how it happened, but it did. God can do anything he wants, at any time he wants. And if that means making it snow on December 10 in Georgia, then bring it on. It is out of my control.

Thank God it’s out of my control.

Sorry, there was a problem.