Have you given much thought to the strength of sense-memory?  How a particular smell can immediately bring to mind people, places or events in your life?

Though I demanded very little in the planning of my wedding, I just had to have gardenias in my bridal bouquet. Out of season and costly, my florist allowed three.

To the sentimentalist in me, that delicately scrumptious flower paid homage to my childhood and celebrated my Southern roots.

But mostly it honored my grandmother.

Dambarr we called her, one of those made-up names invented by the first-born grandchild, the best attempt my cousin Ellie’s tiny lips could manufacture when she was learning to name people, places and things.  It stuck for all the grandbabies who came after.

I liked that name for my grandmother–everyone else had a Granny or Grandma or Memaw,

but Dambarr was wonderfully one of a kind.  Paradoxically like every other grandmother.

Her death the year after my mother’s was painful loss.  By the end of my fourth grade summer the two most important women in my life were gone, making precious every memory of them.

Sometime between third and fourth grade, I think my olfactory sense must have matured. I have strong sense-memories associated with Dambarr but none from my mom~ 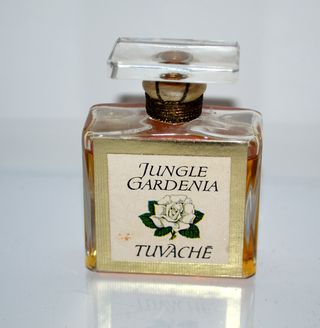 Face powder in a compact

A ham dotted in cloves

When I catch a whiff of any of those scents, my first thought is Dambarr!

Dambarr was a master gardener, and it was among primrose and pansies that she cultivated my love for fresh flowers. I didn’t inherit her green thumbs but rather her love for the end result–blindfolded, I could identify most flowers by their scent, something caught more than taught and I know due to the time we spent in her garden.

Lilies of the Valley were my second favorite; sweet and delicious, their diminutive size plus my imagination had me convinced they were actually fairy parasols.

But my absolute favorites were her gardenias, delicate and aromatic…they smelled like…well…Dambarr.

Gardenia’s scent is unmistakeable; if a bush is nearby, it’s not unlikely you’ll smell them before you see them.

Smoke in the distance, gas in your kitchen, a child’s dirty diaper, flowers in the garden.

Often smells demand a call to action or serve as a harbinger of something else. Whether offensive stench or aromatic perfume, an odor is not unto itself; it emanates from another source.

And so it is with our lives in Christ ~

But thanks be to God, who in Christ always leads us in triumphal procession, and through us spreads the fragrance of the knowledge of him everywhere. For we are the aroma of Christ to God among those who are being saved and among those who are perishing, to one a fragrance from death to death, to the other a fragrance from life to life. Who is sufficient for these things? For we are not, like so many, peddlers of God’s word, but as men of sincerity, as commissioned by God, in the sight of God we speak in Christ. (2 Corinthians 2:14-17, ESV)

Don’t you love how God purposes all our senses for his glory?

In light of the sense of smell and its evocative nature, isn’t this passage thrilling?

Because Jesus lives in us, He lives through us; and though invisible, His aroma is detectable by others.  People process and perceive it differently based on where they are in the faith.

Is this blowing anyone else’s mind or am I the only one?!

When you recall strong sense-memories, those scents that have strong association with your past, does it help you better understand what God is saying through this passage?

I wanna hear your stories.  Do you have strong scent-memories that help you make sense of this passage?  If you’re willing to share one in comments, we can all “stink” to high heaven together.  Or if you have a story about a special someone (like gardenias and my grandmother), let’s celebrate that together, too.

by Robin Dance who smells like Sun Ripened Raspberry from Bath & Body (except for when she smells like Head and Shoulders?!).  She declares PENSIEVE subscribers bless her socks right off her feet and new Twitter friends are always welcome.