I sat in a Writer’s Conference listening to a local magazine owner speak about their submission policy and the ins and outs of the magazine business. I was also concentrating on drumming up the courage to approach her after the session.

Inside my head, I was ordering the words I’d say to her.

As soon as she wrapped up her talk, I rose from my seat– the first to introduce myself. As I began to share part of our adoption story of one child, a raven-haired beauty with ringlets of hair falling past her shoulders, drew near and mentioned she had adopted five children.

Immediately, the magazine owner’s attention shifted to the other mother, who also mentioned her career as an attorney. My degree was in pre-law. Law school was my lifelong dream, which never came to fruition.

To add salt to the wound, the other mom had flawless skin and appeared to be in her early thirties — I was certain she moonlighted as a runway model when she wasn’t raising children or spending hours in the courtroom. She seemed so perfect with her radiant skin, career, and angel-sleeved, fuzzy white sweater.

Their conversation continued and I quietly slipped away, my story untold, a knot in my stomach. Envy, selfishness, and lies flooding my heart.

I have nothing to offer. Why did I come here? How in the world can someone have five children and look so immaculate?

Okay, so I’m a little insecure. The lies seeped in, and I wandered aimlessly down the hall toward the cafeteria for lunch. Alone. I meandered through the line of people, the serving trays, and the conversations of writing projects, which flowed as steadily as the nearby soda fountain. I discovered an empty chair and sank down to eat. Alone.

Suddenly a voice punctured my pity-party, May I sit here?

It was her. The perfect mom.

She placed her food on the table and bent over to pull up a chair. Her dark eyes intensely locked onto mine and she began asking me questions about my story, excitement in her voice.

I asked her questions as well. About her writing. About her life. She was winsome, laughing as she told parts of her story and how the Lord provided in unexpected ways.

As the weekend progressed, I spent more time with this lovely woman, tears in our eyes as we delved into our pasts to share with the other. Ultimately sharing His redemption in our lives.

I discovered how beautiful she is on the inside. Her life was far from perfect. Her husband has a terminal brain disease. There are wayward children.

Between the two of us, there were addictions, treatment facilities, and health issues. Times when we both had husbands who couldn’t drive for a season. I shared my brother’s brain injury, seizures, and subsequent death in his early twenties.

We both bear recent wounds from other believers and the church, times we’ve felt completely alone and isolated from the body of Christ.

Yet, the most miraculous thing we share is a deep heart of gratefulness.

In the world’s eyes, it must seem nonsensical to be thankful. Honestly, it often makes no sense to me. Because there is absolutely no other explanation for two women, who are bloodied and bruised from life, who can still praise the Father — the One who has delivered and rescued us from ourselves.

Although we both deeply grieve and long for heaven, the trials have carved a spirit of thankfulness. A neediness for the only One who can love us perfectly.

As we tightly embraced and whispered words of love upon each other’s shoulders at the end of the conference, I gave thanks to a God who loves and sees me. A God who pursued my wretched, pity-partying, envious self to bless me with a kindred spirit.

A woman who had the courage to say hello. And, by His grace, the openness of my heart to respond with my own hello.

Related: Build your friendships and drop one of these beautiful notes of encouragement in the mail. Discover the simplicity, the importance, and the blessing of honoring friends. 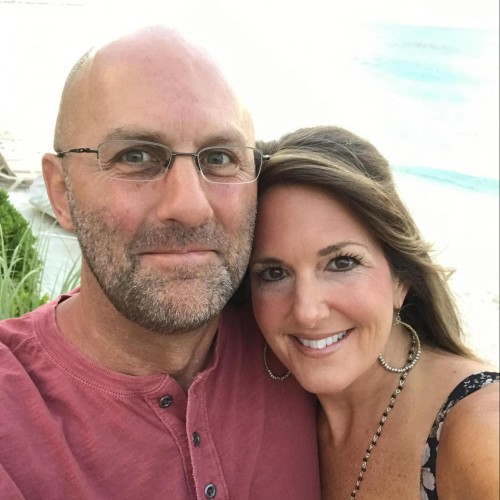 Melanie is a daughter to the Most High King and tremendously grateful for daily grace and rescue in the messiness of life. She resides in Birmingham, Alabama with her husband of nineteen years and their four children--one recently adopted through the foster care system. Melanie writes regularly on her blog...