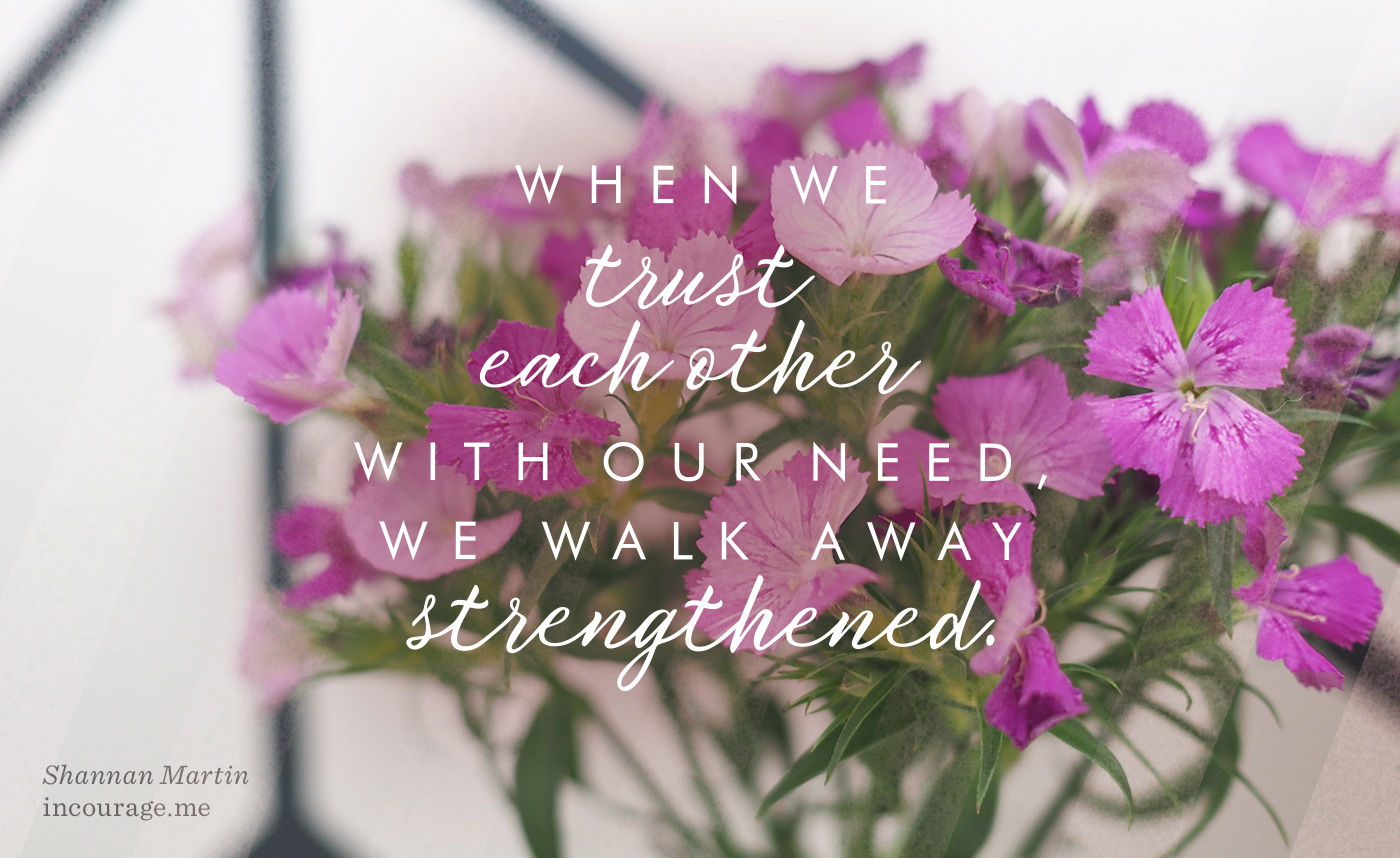 “How are things going with you guys?”

I’ve been asked similar questions several times this week, a few close friends picking up on my unusual distance and coming nearer to close the gap. These friends are among the kindest souls I know, quick with an encouraging word. Even still, it always feels like a loaded question. Will I tell the truth? Do I dare?

“We’re all still here, I guess. We’re all healthy for the most part. But beyond that, no. Not much seems okay lately.” And that was just the beginning.

I told about the meeting I had with the school counselor this week, the work frustrations I was dealing with, the schedule that had become too tightly packed, the contact burns still pricking my skin from walking through an enormously painful situation with a neighbor.

Not shockingly, unloading on a few willing recipients began to lighten my load. It was a tremendous relief. I found myself wondering why this doesn’t come more naturally.

What on earth am I afraid of?

Well, I don’t quite believe my pain is worthy of attention. I’m afraid to draw attention or make the conversation about me. I prefer being the asker, the one who leans in to hear the pain of another. I want to be there for my people. I want to hear them, see them, heave a portion of their trouble onto my scrawny shoulder then hang around until we both begin to forget it’s there.

I realized that in my pride or my faux-strength or whatever it was getting in the way, I was depriving my friends of doing the same for me.

True, in the scope of everything else going on in the world, my problems are hardly worth mentioning.

During one of these “tell the truth” conversations earlier today, a friend trudging through her own dimly lit forest mentioned the story in 1 Kings, where Elijah was fed by a flock of ravens and then by a widow struck with crippling poverty. Though giving her last bit of food to a stranger defied all common sense, the Lord rewarded her obedience with enough flour and oil to sustain her and her family through the drought.

I have to believe there’s something there for us.

The community God intended for us is one which can only thrive with both sun and rain. In order to really know and be known, we’ve got to share the good and the bad. We’re tasked with telling the truth, even on the days when our truth feels more desperate than it probably should. We offer ourselves in this way, even when there’s reason to believe we only have enough emotional sustenance to last us another ten to twelve hours, tops. Then we marvel that we never do find the bottom of the jar. We trust each other with our need, and walk away strengthened.

Here in the doldrums of late winter, all is not right with the world or in our own weary hearts. We’re tired. Cranky. Worried beyond reason. We’re living at the edge of ourselves, offering all we have, operating, at times, from a deficit. We feel silly. We don’t like to complain. But the only reward for surviving alone is loneliness, and we’ve got work to do.

Let’s train our eyes to find each other, our ears to listen, our mouths to speak truth.

We take turns being hungry and pouring the last drops from our jar.

In the end, it is always communion.

Train your eyes to find each other, your ears to listen, your mouth to speak truth. @shannanwrites at @incourage:

Shannan Martin is the author of Falling Free: Rescued From the Life I Always Wanted, wife of a jail chaplain, and mom to four kiddos. She's a big believer in community and salsa, and blogs at ShannanMartinWrites.com.