Last summer our family (my husband, Dave, our teenage son, and I) took a month-long road trip through the United States as part of Dave’s pastoral sabbatical. We made a loop from our home in Northern California through the Southwest to Kentucky and back through the Midwest, visiting family and friends and eleven national parks and monuments along the way. We ate regional foods — fresh-picked peaches from a roadside stand in Fredericksburg, Texas and deep-fried pickle chips in Memphis, Tennessee. We listened to local music — brass bands and zydeco in New Orleans and blues in Memphis.

We paid attention to ‘beauty emergencies,’ a term coined by poet Maggie Smith to describe a natural event happening now; if you don’t look up, you’ll miss it. Like a sunset shifting the Grand Canyon’s cliffs from bright orange to dusky purple. Like elk mamas and babies bugling to one another as they migrated through our campsite. Like a bald eagle swooping low over a Montana river.

We took about a gazillion pictures that I still haven’t waded through to create a photo book. Considering I’m woefully behind in creating my son’s baby book, it may never happen. For now, the pictures remain on my phone and social media, and I flip through them occasionally to soak in the refreshment of natural beauty and joyful memories.

One picture, in particular, is so inconsequential I would delete it except for the memory it evokes. It features ordinary, delicate wildflowers, some yellow, others pink with a ruffle of petals so pale they’re almost white, backdropped by tall green grass. The camera focused on the smallest petal tips, resulting in a photo mostly out of focus. We won’t frame and display it, and still, it’s a keeper.

More than midway through our trip, we had stopped outside Mount Rushmore National Memorial to take a selfie with the park sign, like we had done at every national site we visited. We stretched our legs while we waited for another group to take their pictures. Just as they finished the wildflowers caught my attention, a sprinkling of colorful confetti. I snapped a quick picture of the tiny petals before we meandered over to the sign.

We took our selfie, another giggle-eliciting photo, our son making a face as he squint-strained against the harsh sun reflecting through his eyeglasses. As we returned to our car, one of the women from the other group dashed ahead of us. Like I had done minutes earlier, she squatted down to capture a picture of the flowers. Standing straight again, she smiled timidly and remarked, “I noticed you taking pictures. Thought I’d take one, too.”

I had noticed seemingly insignificant beauty, she noticed me noticing, and it influenced her actions. The experience became a potent reminder that others see what we do and how we live. We know that parents model behavior for their children who begin learning almost immediately after they take their first breaths. But others are watching us too. Family members, friends, neighbors, coworkers, and strangers also take note of our lives.

Without saying a word, we may attract or repel someone to us, and ultimately to God, through what we do.

It reminds me of Paul writing to the Philippians when he urges them to  “…become blameless and pure, ‘children of God without fault in a warped and crooked generation.’ Then you will shine among them like stars in the sky as you hold firmly to the word of life” (Philippians 2:15-16 NIV). While I prefer to think of friends and neighbors not as “warped and crooked” but as God’s beloveds who may not have responded to His love yet, still I long to shine among them like the stars in the sky. Only by God’s grace am I blameless and pure while I hold firmly to the word of life. I hold firmly to the One who called Himself the Way, the Truth, and the Life, and I long for others to catch glimpses of His wonder when they look at my life.

We spent the last night of our trip camping outside Ketchum, Idaho, where the stars shone remarkably bright. We saw stars in constellations and the swirl of galaxies. We stayed up late staring into the night sky, feeling grateful. I haven’t met anyone who doesn’t at least glance at the stars on a clear night. Noticing beauty points us to the Artist who created that beauty. God created each one of us in His beautiful image and He has given us a great big beautiful world in which to live.

I relish the task of living a beautiful life as I seek and share beauty that may lead someone to Love.

God created each one of us in His beautiful image and He has given us a great big beautiful world in which to live. -Siv Ricketts: 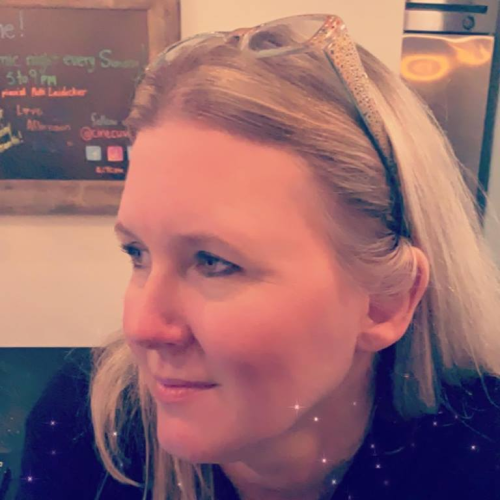 Siv writes to encourage you to have hope, seek beauty, and live joyfully. A graduate of Westmont College and Fuller Theological Seminary, she lives in the San Francisco Bay Area with her husband, two sons, and their menagerie of pets.