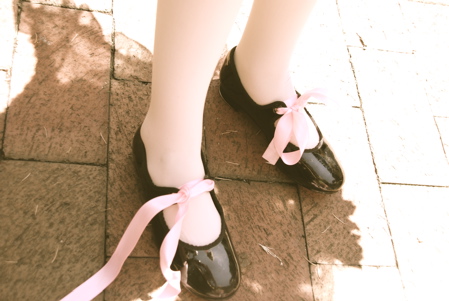 Dance camp was the talk around the snack table for weeks before it came. They couldn’t wait to go. I had blurry-edged visions of sparkly tulle, princess crowns and smiling children taking bows. Having twin girls does that to a pink-loving mommy. As they have a habit of doing, dreams reluctantly gave way to practical reality, and the week didn’t quite go as I had so fantastically imagined.

Monday went okay. They went. They did the craft. They ate the snack. They didn’t cry.

The teacher told me there was a glitch on Tuesday, with an incident in the middle of class where one twin didn’t want to let go of her sisters’ hand.

By Wednesday morning, I got the I-don’t-want-to-wear-a-tutu speech from twin number one. When I asked her what she would like to do, she quietly made a motion with her hands, as if holding an imaginary baseball bat. So that left twin number two on her own, to navigate through the rest of the week, sister-less.

It didn’t phase her much. She came down the stairs every morning, tutu in hand. Aside from the multiple hugs and kisses she demanded before I dropped her off, she willingly walked into her class and remained there without tears. One thing she didn’t do all week? Dance. She simply stood there in class, interested but disengaged.

What started as slight irritation on my part quickly morphed into full-fledged, eye-rolling, impatient mommy monster. What’s the big deal? I thought to myself, Why won’t she just have fun and be a kid? Why so serious? We paid money for this! What a waste.

I wondered how the recital would go at the end of the week with parents watching. I fully expected her to find us in the audience and walk directly to us, refusing to remain in the spotlight.

I was prepared for that.

Instead, she simply did that which she had done all week: She stood there. I think in some way, she believed she was performing, showing us what she had been doing at dance camp. As I watched her stand there still in the midst of twirling girls in tutus, my mama mood shifted from one of frustration to overwhelming compassion for this small brunette, standing with purpose, focused intently on those dancing around her. She was determined to be there in the midst of the dancers but just as determined not to dance.

Watching her that day, I began to see her. Not as my daughter, but as a person. As a girl. And I could relate with her. I know what it is to long to be a part of something bigger than I am. But I also know what it’s like to miss out on the fullness of the dance because of fear, anxiety or expectations. Still, courage rose to the surface in her that day, allowing her to remain standing even in the midst of great anxiety.

And for different reasons than I thought I would be, I was proud.