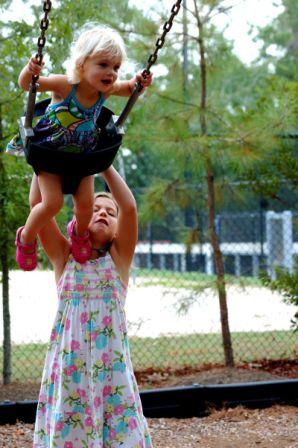 There is a small park tucked in the woods at the end of our street.

We call it The Dinosaur Park, not only because the rusty, faded slide is shaped like a T-Rex. It’s archaic.

At the beginning of summer, we received a letter stating that new park equipment was going to be installed. (My kids were thrilled for obvious reasons, but I was glad for their [current] unbroken bones).

And it arrived the first week of school.

After dinner one night, we tiptoed to the edge of the yellow caution tape and spied the shiny new slide, rock wall, swing sets and play structure. It was impressive. But it wasn’t completed.

“Look!” my daughter pointed to the swings. “There’s wet cement!”

Sure enough, the cement securing the structure to the ground was fresh.

[Now this is probably where the rule followers should stop reading.]

“Can we write our initials, Dad? Can we, please?” they begged.

Now I don’t consider my hubby rebellious. Let’s just say he has a great spirit of adventure. And he’s rebellious.

He helped my kids write a big J and M for their names.

I stationed myself to make a quick getaway in case we were caught since I’m not really into mug shots.

Much to my relief, our graffiti went unnoticed and we headed home.

My kids skipped the entire way.

We passed by the park every day on our way to school and noted that each time, a little more progress had been made. The mulch was spread. The ‘Wet Paint’ signs were removed. The caution tape disappeared.

When it was finally ready, we didn’t go. Don’t blame me. My toddler refused to eat dinner, demanding pink donuts instead and my older kids would not stop picking at each other. I had no choice.

But we went the next day after school.

I was pushing my toddler on the new swings and my son was nearby. My older daughter was around the corner at the rock wall and while I couldn’t see her, I could hear.

And what I heard nearly stopped my heart: A strange man’s voice talking to her.

I ran around the corner to find an elderly Park Ranger asking my girl how she liked the new park.

He spotted us on his way to make a final inspection and told us we were the first ones to play.

“Oh, we love it! We even drew our names in the wet cement!”

Did you know wishing the ground would open up and swallow you whole doesn’t actually work?

My son ran off and I was left with my mouth hanging open, stuttering an explanation.

I nodded and said ‘yes sir’ to the resulting lecture. And since the crime scene was covered with fresh mulch, he considered us harmless (thank the Lord) and didn’t arrest me and drag me to the local Park Ranger jail-thingy with my helpless children wailing nearby.

I’ll be honest, I wanted to strangle my hubby. Thankfully, that feeling passed and I walked home with my kids, embarrassed and humbled.

I’ve always been a proud person. And then, God made me a Mother.

He reduces my pompous attitude with the innocence of my children. My arrogance is diminished in their honest words.

I stumble on the Holy words from The Good Book, “Pride goes before destruction and a haughty spirit before a fall.”

I am made modest in the virtue of my children. It is in that pliable place that He writes on my heart.