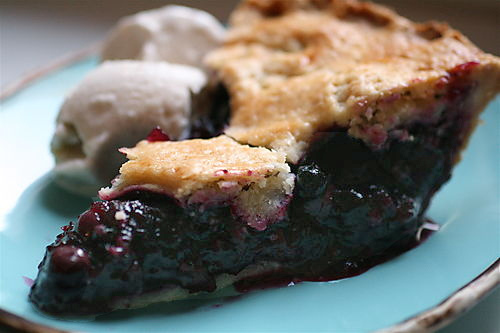 Finding out what happens when you look for opportunities to give. To start from Day 1, click here.

This story is taken from Dec 4, 2008, The Generosity Experiment.

My husband and I just got back from lunch. This was a rare occasion. Ususally our schedules and the distance from each other’s place of employment (45 minutes) is not convenient for a noontime rendezvous. But today was special – not a special occasion – but an ordinary Wednesday afternoon opportunity to eat at one of my favorite places, The Wooden Spoon, and introduce him to it. They’re famous for their desserts.

As we were gazing at the list of scrumptious pies on the chalkboard, I kept noticing a mother and daughter sitting next to the menu. The woman was older and the daughter was a 40+ woman with Down Syndrome. My heart ached for them. They didn’t say much to each other, but ate their food and sipped their hot chocolate and tea. It’s in these moments that I swallow back tears and ask ‘Why?!’

I looked across the table at my husband and tried to whisper to him what I wanted to do. The restaurant was loud and it took a couple of tries, but I finally was able to communicate the plan. He easily agreed. I quickly pushed back my chair, headed toward the kitchen, and found our waitress. I told her we wanted to pay for this mother and daughter’s lunch. “Just put their lunch on our bill and if they ask who did it, please don’t tell them.” She simply smiled and told me she would take care of it.

As we ate our meal, I would occasionally glance their direction. Then the waitress brought their to-go box and placed her hand on the mother’s back as she leaned in to tell her the news. There was a pause and the woman looked up at the waitress with disbelief.

I strained to hear what was being said, while I was trying to act like I was listening to my husband and working diligently as not to make anyone in the restaurant aware of what was taking place. They got up to leave. The woman passed by my chair, not realizing we were the gift givers. Her daughter looked straight at me and said ‘Hi.’ We both smiled and I replied, ‘Hello.’

A few minutes later the cashier of the restaurant came to our table and asked if we were the ones that paid for their meal. I told her we were. She said, “That woman told me that she was 79 years old and had NEVER had anyone EVER pay for her meal. She wanted me to thank whoever did such a nice thing and let them know how much she appreciated it.”

This mother and daughter twosome could have had 13 desserts each for all we cared. It didn’t matter how much the bill was. We were going to treat them to lunch. But instead, they ‘treated’ us to a warm heart on a cold afternoon and a smile for the rest of the day.

By: Someone You May Know