I was living in the middle of another December. Behind the wheel of my minivan, Christmas to-do’s were on the list but my mind was distracted with brooding introverted things: life meaning, love longing and tired regret.

I was stuck somewhere between cloudy mood and daily task when the second verse to an old familiar Christmas hymn made its way up from the background. 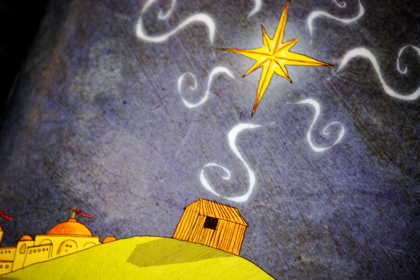 So God imparts to human hearts the blessings of His heaven.

No ear may hear His coming, but in this world of sin,

Where meek souls will receive Him still,

The dear Christ enters in.

It was one of those rare moments when the veil is lifted and you get to see with eternal eyes. Alone in the car, the long ago reality of a little town, a God baby, a teenaged Mary and a genuine King became clear as never before. In that moment, long ago became right now.

Somehow He quietly slipped into humanity that night, born to die so I can have life. Not just life forever later, but life on this real day, in my car in the middle of my emotional rut. There is a choice of death or life, conflict or peace, despair or hope. Because if his birth isn’t significant for me right now, then it isn’t significant at all.

As I continued to drive, it began to seem as though she was singing about me and not a little town called Bethlehem. Among the sometimes dark streets of my soul, He shines His everlasting light. He chooses to be born in me so that life and peace are made available to me in limitless supply.

What Christmas song speaks to you?