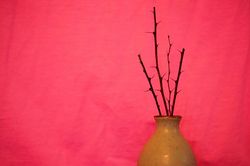 I only stood because  no chair could hold me. My legs shook visibly from the trembling sensation radiating from my waist down to my toes. I balled my fingers tight into fists and held them close to my chest in an effort to stop pinching my neck. I did not wish to appear even less stable, although next to the confession I had just made, I do not think it would have mattered. Beside me, my husband exhaled slowly and shifted his weight from foot to foot as he absorbed the words my psychiatrist spoke to him about me.

“This situation has dangerously escalated. If there has ever been the time to use the term nervous breakdown, it is now. Your wife needs to either be hospitalized or put under the close care of family members. If you are unable to make a decision, I am prepared to send staff from the local psychiatric hospital to your home this afternoon to have her committed.”

A nervous breakdown. A serious term often tossed about casually in every day conversation. But in this case, it was not a figure of speech, it was my reality. I had entered a state of mind where functioning was barely possible.

A place blanketed by feelings of shame and hopelessness.

A place dominated by confusion, fear, and self loathing.

A place I found myself in when I was more than wounded…more than broken.

A place that collects the shattered.

A combination of Perinatal Mood Disorders, including Postpartum Depression and the lesser known Postpartum Obsessive Compulsive Disorder, and Postpartum Anxiety Disorder led to my breakdown. It was my second battle.

And this battle was even more severe than the first, which in my darkest moment found me lying on my living room floor in a literal puddle of my own tears plotting ways to end my life while making it appear accidental. That time I received just enough help to function. Just enough to fool me and those around me into thinking that I had it all together.

I think the fact that I did not receive enough help and intervention during my first perinatal struggles led to the intensification of my second battle, the battle that alarmed even a psychiatrist. The symptoms the second time around were very similar to what I had experienced after my daughter’s birth. Both times my symptoms:

* Manifested during pregnancy and lingered after the births of my babies.

* Included panic attacks. For instance, I could barely breath each time I entered a grocery store. And every time I stood within a few feet from my kitchen sink I became sweaty and cold , concerned that I would get my hand caught in our garbage disposal.

* Left me feeling easily agitated and emotional. I would hold my baby and cry to the point of convulsions due to the intense love I felt only to seconds later angrily scream profanities at my husband for reasons neither of us understood.

* Interfered with my sleeping patterns. Exhaustion plagued me during my pregnancies and postpartum days and I easily drifted to sleep. However, staying asleep, especially at night became a problem. Each time I awakened to go to the bathroom or tend to the baby I tossed and turned anxiously for hours instead of falling back into slumber.

* Included irrational fears that I would hurt my husband or children. These fears always started with the words “what if” and left me questioning my sanity as well as the safety of my family. “What if I accidentally dropped my baby out of a second story window?” What if I dropped her on purpose?” “What if I grabbed a hammer and smashed it against my husbands skull as he slept?” “What if I tossed my infant into the swimming pool and walked away?” And countless other unnerving what if questions.

I need to pause and make a very clear distinction. I never wanted to do those things. I knew they were wrong. I desperately loved my babies. This added to my shame and confusion.

I didn’t know then what I now know.

I didn’t know that the fact that I recognized that those thoughts were wrong meant that I was not insane.

I didn’t realize that my hormones were out of control and that I had a very real illness.

Instead I thought that there had to be a monster lurking inside of me. I thought that if I could think those thoughts that I was capable of atrocity. I believed that my children would be much better off to not have a mother than having me for their mother.

Stopping the thoughts became an obsession. The other symptoms were terrifying enough, but to have an innumerable string of obsessive thoughts circulating my conscious was unbearable. During my first battle I thought the only way to end the thoughts and keep my family safe was to end my life. The first time I had lied to my family doctor about the severity of my symptoms afraid that she would take my baby from me. I only told her that I was feeling moody and depressed and asked for a low dosage antidepressant that did lift the edge.

Intent on keeping the promise I made to my husband about not committing suicide I looked for another solution during my second battle. The antidepressants I took did not seem to help much at all and I thought that if I could just alleviate some stress from my life that I would be able to cope. I prayed, I sought out counselors, I changed my diet, but still I felt myself melting. I thought of running away, but could not bring myself to leave. However, thinking about how many people depended upon me was almost suffocating and led me to make terrible choices. While I did not physically try to harm myself, my husband, or my children, the choices I made were indeed terrible enough to require psychiatric intervention.

Due to the young age of my breast feeding infant, my husband and I chose the option of me and our kids staying with family instead of hospitalization. We went to where my family lives for about 4 weeks and I remember very little of that time.

Many times during my battle I felt like a failure. A failure as a woman, a wife, a mother and a Christian. I felt like I didn’t have the faith I needed to get better.

And then, a new perspective came to me and I honestly believe that it came through prayer. I decided that I was going to deal with my Perinatal Mood Disorders in the same manner I would deal with learning I had cancer.

How would I react if I learned I had cancer? I would fight it by researching medications, changing my diet if recommended, soliciting the advice from trained medical professionals, seeking support from others, and most importantly, I would pray and listen to my Father’s voice. And that is what I did during my final battle with Perinatal Mood Disorders. In moments like I faced, there is no guide more suitable than the Good Shepherd.

My battles with Perinatal Mood Disorders are behind me as I have been symptom free for two years. I now enjoy my children and being a mom. However, my story is still with me, and although it is a difficult story to share, it is one I can share without shame. It is one I can share willingly knowing that by doing so others may be helped. If you or someone you love is experiencing any of the symptoms I wrote about or additional symptoms that cause concern, please do not hesitate to tell your story to a healthcare professional.

Please remember that no matter how dark it seems, the light of hope exists. During this week, there will be more stories and resources regarding Perinatal Mood Disorders at Becoming Me.

by Angela Nazworth, Becoming Me

Angela Nazworth is a shame-fighting storyteller who writes mostly about the beauty of grace, faith, friendship, vulnerability and community. She is a wife and a mother of two. Angela's also an encourager, a lover of good books, coffee, girl's night out, sunshine, and waterfalls. In the 15 years since she...