Everyone loves a good birth story, right?  Especially us women.  So in honor of Mother’s Day a few weekends ago, and because I’ve got baby on the brain with number three coming in just a few weeks, I’d thought I’d share the birth of number two… 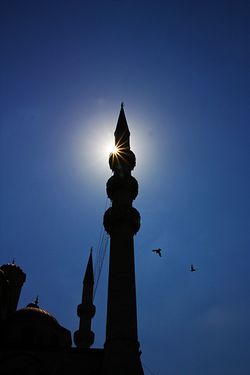 This isn’t one of your typical birth stories, complete with bloody details of goo and grime, or with an overload of info about dilation and effacement. But it is a bit interesting, if I say so myself.

My son’s birth was a planned c-section because my daughter’s birth was an unplanned one. It wasn’t a major emergency or anything, but with our host country’s enormous over-dependence on having elective c-sections… well, I really had no other choice.

Oh, by the way — this was in the Middle East.

When the big Birth Day came, my husband Kyle and I had a leisurely morning, chatting, packing, and spending time with my mom, who had arrived the night before. We then dropped our daughter off with friends, checked into the hospital, and were promptly shown the deluxe suite, undoubtedly because we’re Americans.

It was a whopping $400 US extra a night, so we asked to see the other rooms. We were then shown the $300-extra-per-night room.  Yes, the crystal chandeliers and the mahogany beds were lovely.  But were we really going to enjoy them?  Ultimately, we checked into the basic room for NO extra per night.  I think they got the idea.

I changed in to my lovely paper gown and my husband, my mom, and I were taken down to the operating floor. They wheeled in a bed for me, I was told to hand over my glasses to Kyle, and I barely said goodbye before they whisked me away.

(The husbands aren’t allowed in the room for c-section births, due to unpredictable fainting spells.)

It’s a rather big deal that I can’t wear my glasses because I can see jack squat without them. I’m as blind as they come. So not only am I now partly-deaf due to the language barrier with all the hospital staff, I’m now mostly blind.  I felt like a sitting duck.

Things rather quickly escalated in the operating room. The gaggle of nurses and doctors shot me questions left and right. I answered in my broken tongue, to which they mumbled knowingly to each other, “She’s a foreigner.”

This explained my deer-in-the-headlight look, I suppose, so after awhile they stopped speaking to me and just started doing things to me. They’re pleasant enough, in this culture, but in general, the people are a bit… brasher and rougher than what Americans are accustomed to.   Because of this, I now felt like a slab of meat, poked and prodded by latex gloves and cold steel instruments.   And since I couldn’t see anything, I didn’t have advanced warning when anything would happen. 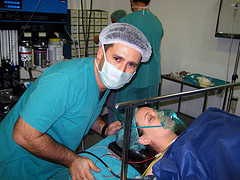 At long last, my OB and her assistant walk in, both of whom speak beautiful English. Her assistant carried Kyle’s camera, and he proceeded to take a bajillion photos of who knows what — mostly me in my paper gown and hair net, looking off into the distance due to aforementioned blindness.

It took the anesthesiologist three tries to get the darned thing in my back. And it hurt like the dickens the entire time, all the while him telling me things like “arch your back like a cat” in the native language, with me doing my best to comprehend.  My OB and her assistant kept repeating benign things like, “We are so proud of you” in broken English.  Apparently, the anesthesiologist did what he needed to do, because he finally finished, and I could lay down.

I’m strapped down with my wrists out on either side of me, with a blood pressure cuff on my bicep. It’s on so tightly that my arm goes numb every time it balloons.  Eventually the cuff just pops off.

Instead of lessening its grip, the nurses TAPED IT BACK ON ME. So now, not only is it on ridiculously tight, it’s taped on me in such a way that tears at my skin. I had bruises on my arm for weeks from that thing.

The doctors then casually asked me what I’m going to name the umbilical cord. I’m told this is a tradition in this country, and that if I can’t come up with one, I should call it “Arap.” This is the OB’s assistant’s name. I told him that’s fine. And I hoped they don’t give it to me later.

The doctor then draped a blue “good luck” charm across my shoulders , telling me it’s also a tradition here and that it will bring me success in my delivery. I’d take it off if I could, but my arms were strapped down.

So the doctors and staff stood around, waiting for the epidural to take effect, and I’m lying there with all of them watching me – I’m strapped down, I can’t see, and I mostly can’t understand what they’re saying.

They wheel the blue curtain in front of my face, so that I can’t see what’s going on (so glad for that — I was wondering when it was coming). However, below the curtain they proceed to strip me down completely, and I can’t even describe to you how beyond uncomfortable it is to have all those total strangers able to do whatever to me while I’m completely undressed and mostly blind. And I start to get really cold, too.

Then came the best part of the entire ordeal – the test to check if the epidural was clicking.  At first it wasn’t  so bad — the doctor swabbed a dab of cold liquid on my leg and asked if I could feel it.  I could.   He did it again to my abdomen, and yes, I could feel that too. He did this again and again, all over my body.  I could feel it each time, and the liquid was getting colder and colder.

The medical team then proceeded, without warning, to insert the catheter – as another means of testing whether I could feel anything.  And let me tell you, I could. I let them know, in a delightfully gracious way.

Next, and still without warning, a nurse poured a pitcher of ice-cold water on my abdomen. I couldn’t help but scream, and my teeth started chattering. I started shaking with cold. They poured water on me again, again, and again.

Finally, my OB clinically said, “Can you feel this?,” and I experienced a stabbing pain in my abdomen so excruciating, my mind went immediately to those shows on TLC about people who go through surgery without the anesthesia taking effect. I screamed, “YES! Ow ow ow ow ow ow ow ow!!!!”

The last thing I remembered was the doctor saying, “Okay, we’re going to sedate you.”

I woke up in the recovery room with Kyle and my mom at my side. I was freezing cold, though I had layers of wool blankets on me. (I found out later that this is just the normal side effect from coming out of general anesthesia, but at the time I was wondering what on earth just happened to me, and what meat locker I was stored in.) 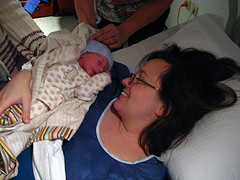 And then the nurse finally wheeled in my son.

This is when I realized what happened — that I had already given birth, that it was finally over with, and that I was out of it the entire time.

The OB came in to check my incision, and mentioned that the good luck charm apparently didn’t work.  She also let me know I got a free, complimentary tummy tuck — she chopped off about five millimeters of skin.  In my sedation, I apparently said, “Is that all?”

My recovery time at the hospital was much less eventful, thank goodness. I had to ask a nurse to remove the epidural IV left in my spine. They didn’t realize it was still in. It wasn’t removed until day two.

And as we waited at the elevator to go home, one last nurse ran over and looked up the back of my shirt, just to double-check that it was removed.  You know, because I wanted to sneak it out as a souvenir.

In the end, it was worth it.  Two years later, and our bright-eyed, silly two-year-old boy is jumping chaotically in front of me, just for fun.  His addition to our family is perfect.  The cross-cultural experience was worth it.

But I’m glad I’m in the States for birth number three.

Tsh Oxenreider is the author of Notes From a Blue Bike and the founder of The Art of Simple. She's host of The Simple Show, and her passion is to inspire people that 'living simply' means making room for more of the stuff that really matters, and that the right,...