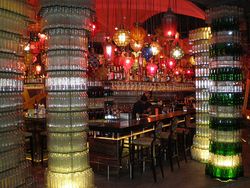 It was a mixed group. I didn’t know many of the people around the table as we all sat down to a late dinner. He sat at the corner of the table and he looked me straight in the eye. With giddy expectation he asked,

“So what’s your schtick?”

He was asking me what my “thing” was. My cause. What movement I am a part of. As if everyone needs to have a cause, or a blog badge or a little tiny photo in the corner of their twitter avatar.

Should I lie and say I speak out against human trafficking? Or impoverished children? Should I say that I build wells in Africa and my goal is for every human to have clean drinking water?

It wasn’t enough for him, apparently, because his faced dulled and his eyes glazed as he glanced over to my friend and asked her the same question. Her answer was much more professional, eloquent and far more interesting.

They began a conversation and I fiddled with the damp napkin under my water glass. I tore off a piece and wadded it up into a ball.

I half listened to their conversation, half thought about what my “schtick” was. They laughed at something.

I didn’t say any of that.

I told him I was a mother.

Just being a mother isn’t “sexy” enough for most people. It isn’t a worldwide cause or social movement. And even speaking and writing about marriage and relationships isn’t exciting enough for a lot of people either. There isn’t anything living-on-the-edge about talking about kids and marriage.

As soon as I’m figured out, that I don’t really do anything more than mother, wife, write and occasionally speak, I’m shuffled to the back of some people’s minds as

not a “strategic” person to get to know,

unable to bring something worthwhile to the Christian table, or

What if my schtick were ONLY that I was a mother with all of the energy and intention possible, with as much gumption that I could muster, and with as much widespread love that my body could contain? It still might not be good enough. What if I were to do the best possible job at it? To impart truth and communicate grace, to sit on the floor of my 8 year old’s room and answer her big questions when it’s 30 minutes past her bedtime.

Is that an important enough cause for me to marry myself to?

I think it is.

I will do my best within MY calling. My calling may change over the course of my lifetime, but right now, today and in this upstairs bedroom as I type out this article, I know what I’m called to do.

I’m called to be a present mother. To be a proud wife. To write and speak words God gives me.

And that, I believe, is enough.

What are you called to do?

by Sarah Markley, The Best Days of My Life