It was on a Tuesday, the 85th day, that I walked through the glass doors to hear the alarm flashing, to see the doctors and nurses working frantically over her body as she went limp and gray. Lifted up and carried out, flailing against the arms of the strangers removing me from the scene, I didn’t realize I was screaming until they gently told me to stop.

It was on a Tuesday that I discovered the whole of my relationship with the Lord could be condensed down to a thin, flat red line pulsing across a small black screen.

Nine months prior I had stared down at a positive pregnancy test and whispered an age old prayer of thanks. I was Hannah, grieved in my infertility and rejoicing at the long awaited promise of a child.

You count your pregnancy by weeks and I was at twenty five when the doctor laid her hand on my shoulder. “We’re taking the baby” she said. I breathed deep of the oxygen mask, gripping hard to the cold hospital bed rail and the place where not seeing becomes believing as they cut my daughter from me.

And in that moment the once indefinable weight of glory was spelled out across the scale they laid her bare on.

People often ask me how my faith was tested during that time. “Not tested,” I answer.

I had thought myself knowledgeable. Former Vice President of the FCA, answers were what I had. I studied the Bible. I knew stuff. And around my heart I amassed a collection of religious tokens that began to cast a shadow over the genuinely important.

In my most desolate of moments everything else I had wrapped around my faith fell away and left exposed the single most defining truth: He is who He says He is.

In a fit of incompatible emotions I both raged at Him and begged Him to heal her here on this earth. Either way I would be forever changed, marked by this shift where my faith became intangible. That was where I was that Tuesday, with my face pressed against the glass, suspended between hope and desperation and clinging to the same answer regardless of the outcome:

Scarlette purses her lips when she is concentrating on something, her brow furrows as she gingerly flips the cardboard page of a rhyming book. “God loves you more than the deepest sea…” I read to her. She is curious about my tears, tracing the path they’ve made down my cheek with her finger. “Mommy is crying because she’s happy” I tell her. She’s not even two so I can’t explain to her that these simple rhyming words in her favorite book are just a portion of the mercies that are new every morning.

One day I’ll give her a bigger book with a soft, leather cover and tell her it’s a love story.

The truth is, I did nothing. I didn’t live well or believe well or stay strong in my faith. I laid with my face on the floor in the darkness and just let the small, inextinguishable flame of truth do what it is meant for. No one will write my name in history books as a woman of great faith nor will I pen studies giving guidance on overcoming adversity. They’ll simply reference an ancient text and see where in one life, it was true:

For where I am weak, He is strong

Written by Kayla Aimee of Only Slighty Neurotic 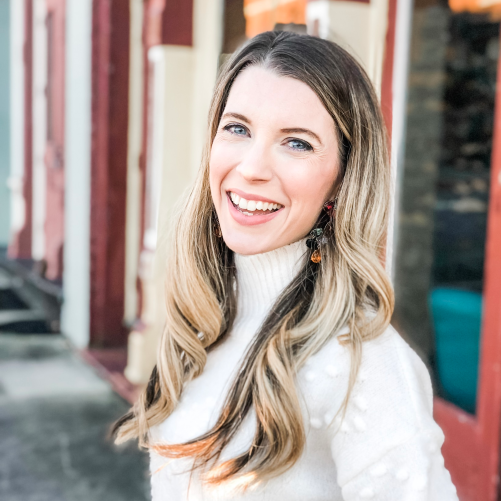 By day I'm a 20something (slightly neurotic) southern SAHM to Scarlette, my 25 week preemie but by night I'm a blogger...