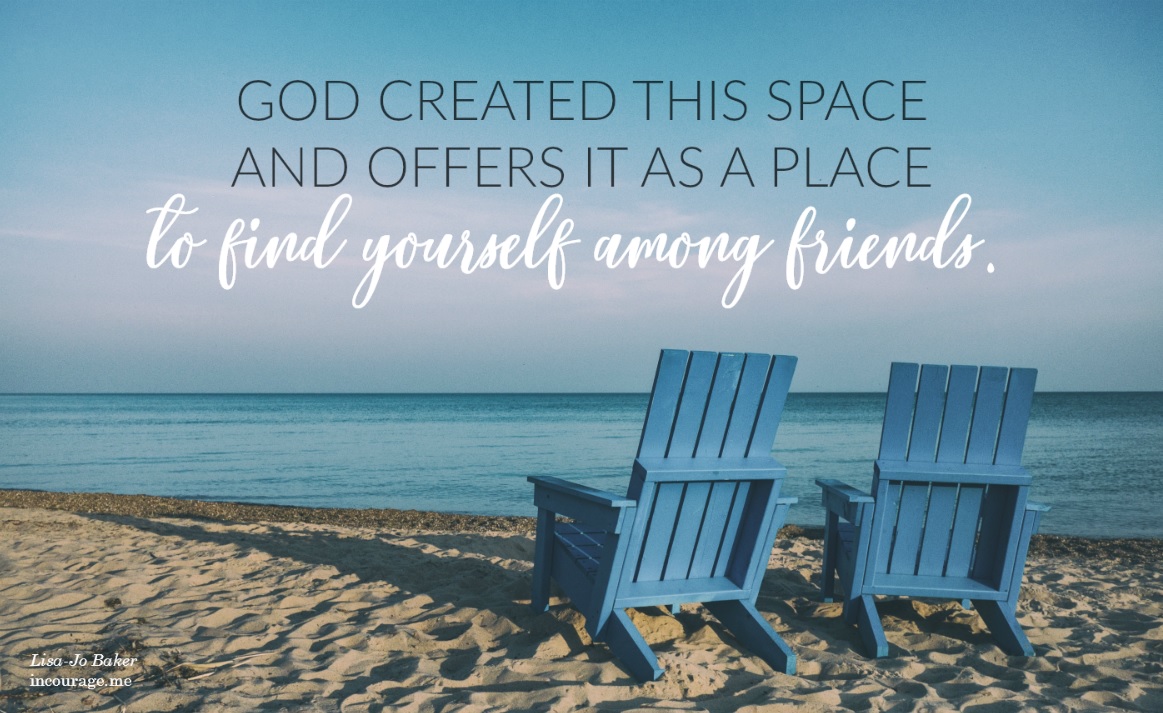 At the tail end of a very hot June nearly ten years ago, I flew to Arkansas and ate fried okra for the first time. I ate fried okra, chicken fried steak, and drank cherry Coke sitting in a mahogany corner booth in the company of two women I didn’t yet know would become cornerstones in my life.

I sat across the booth from Holley Gerth and Stephanie Bryant, the co-founders of (in)courage, and we talked about you. Maybe you didn’t know that? But we did. We talked about what it means to curate a space online where women can feel safe. Safe to dream and safe to question and safe to believe and sometimes safe to bleed. We talked about the hope of gathering women from all walks of life, all zip codes and time zones and bringing them home to the place where God calls us all, daughters. By the end of our time together my heart was as full as my belly and nothing tastes as good as Southern cooking and fresh new dreams.

The morning I was flying home to DC we realized we hadn’t taken a single photo together. I have a thousand images from those days printed on my memory but only one small snapshot. It’s not a great one; phone cameras were very different back then. Right before I walked into the airport we remembered to hold onto each other and this moment and record it so that we could meet you together. That was June 6, 2010. I regretted wearing long sleeves in that heat, but nothing else. I didn’t regret anything else about that day.

The day that Holley and Stephanie invited me to be the (in)courage community manager.

It’s been seven and a half years from that day until today.

It feels like seven lifetimes. So much has changed. But still, these women are rocks of remembrance and safety in my life. They were there at the very beginning when God asked me to come and serve the community of women here at (in)courage and they’ve been with me the last several months as I’ve heard God calling me again, this time in a new direction.

As 2017 quietly came to a close under the hush of snow, I sat with the promise of Emmanuel with us, and the assurance that God’s Word is always good news — and I came to the close of my own journey as the community manager at (in)courage.

What a strange sentence to type. Because look at all we’ve journeyed through together — the start of guest blog posts and (in)courager community groups, the launch of the (in)real life un-conference and its rebirth as (in)real life:Friended, a partnership with LifeWay and more tweets, letters, blog posts, and conversations than I could possibly count. From fried okra in June 2010 to hot chocolate in December 2017, it has been the greatest honor of my professional life to serve you — the women of (in)courage.

I am changed deep down in my DNA because of you.

You have changed me and taught me many of my own flaws and weaknesses and how much I need God’s wisdom and how grateful I am for His grace and the grace of friendships. How Jesus, Emmanuel, is the most with us through other people. And we connect most intimately when we open ourselves up to the people He has placed in our lives.

I carry your names and your stories in my heart and I carry a profound hope for your future in my prayers. I am filled with expectancy.

As I was leaning in to try and catch what God has been speaking into my spirit this year, I turned again and again to the story of old Moses in Deuteronomy:

Then Moses went up from the plains of Moab to Mount Nebo, to the top of Pisgah, which faces Jericho, and the Lord showed him all the land: Gilead as far as Dan, all of Naphtali, the land of Ephraim and Manasseh, all the land of Judah as far as the Mediterranean Sea, the Negev, and the plain in the Valley of Jericho, the City of Palms, as far as Zoar. The Lord then said to him, “This is the land I promised Abraham, Isaac, and Jacob, ‘I will give it to your descendants.’ I have let you see it with your own eyes, but you will not cross into it.” (Deuteronomy 34:1-4)

For the last nearly six months I’ve heard God’s still quiet voice get louder in my heart as He’s made it clear that as much as He called me to (in)courage seven years ago, He’s now calling me out. And that while I have glimpsed this new season, He plans to take our beloved (in)courage community across the Jordan into a new land of promise with a fresh vision and a fresh leader.

I believe in my bones that God has a new promise for (in)courage.

I’m so grateful to Him that He let me lead this far. And so certain that the time has come to pass that leadership on to someone else. Someone who never sought or expected this calling. Someone who has always only served here at (in)courage. Sometimes in the humblest of capacities. Someone who has been quick to own her own failings and failures and even quicker to ask how she can learn from them.

So it’s been my honor to wait on Him to know who that woman would be. For a year now I’ve had only one name on my heart. And after much prayer with Holley, Stephanie, and the entire DaySpring team, we are of one mind that God has called Becky Keife to step into the role of community manager serving the contributors and readers of (in)courage. And without unraveling a long and beautiful story I’ll simply say that we prayed God would reveal to Becky what we were going to ask her so that she wouldn’t be surprised.

And as only He can, He did.

And she has accepted the position to come and serve. To wait on God alongside the writers and community of (in)courage for where He is calling us.

I know Becky has a heart to hear God and to build a space that continues to reflect more and more of His Kingdom and I’m so excited to see where He leads her.

For the first few months of this new year, I will stay on in a limited capacity as a mentor, a cheerleader, and an encourager to support Becky. But I will be looking now to Becky to lead. And I am eager to follow. In the next few weeks you can expect to hear more from her. But for now, I wanted to introduce you to my dear friend and our new community manager, Becky Keife.

Dear friends, if we were gathered around a big table right now, you’d see me wiping tears — I just can’t get over God. I can’t get over His great story and that I get to be a part of it by serving this amazing community. I have known and loved (in)courage since nearly its beginning. Long before I joined the editorial staff, I was a reader, a commenter, a fellow community sister. incourage.me was an ever-present tab on my computer screen, a continual companion of encouragement, inspiration, and truth. This place has changed me.

Humbled and honored are the words that come first when I think about being your new community manager — yet these words feel small and inadequate to express the great joy and deep God-assurance that make my heart almost burst. Friends, God has such good things in store for us in this new season! As the team and I continue to lean in to the Lord to listen, dream, surrender, and plan, would you pray for us? Pray for God to reveal what the new promised land for (in)courage looks like and how He wants to lead us there. I’m so grateful for each of you. I can’t wait to share more. ~Becky

I hope you’ll come with us. As we follow the God who first called us. The God who created this space and made it home and offers it as a place to find yourself among friends. That’s the thing about home, isn’t it? We get to take it with us, no matter where we go. So while I will now follow our faithful Fisher of women into a new season, I will take this home with me. And all the friendships it represents.

One thing that will never change is this — I remain, your friend and sister, Lisa-Jo.

'I believe in my bones that God has a new promise for (in)courage.' Join @lisajobaker for a family news update at @incourage: