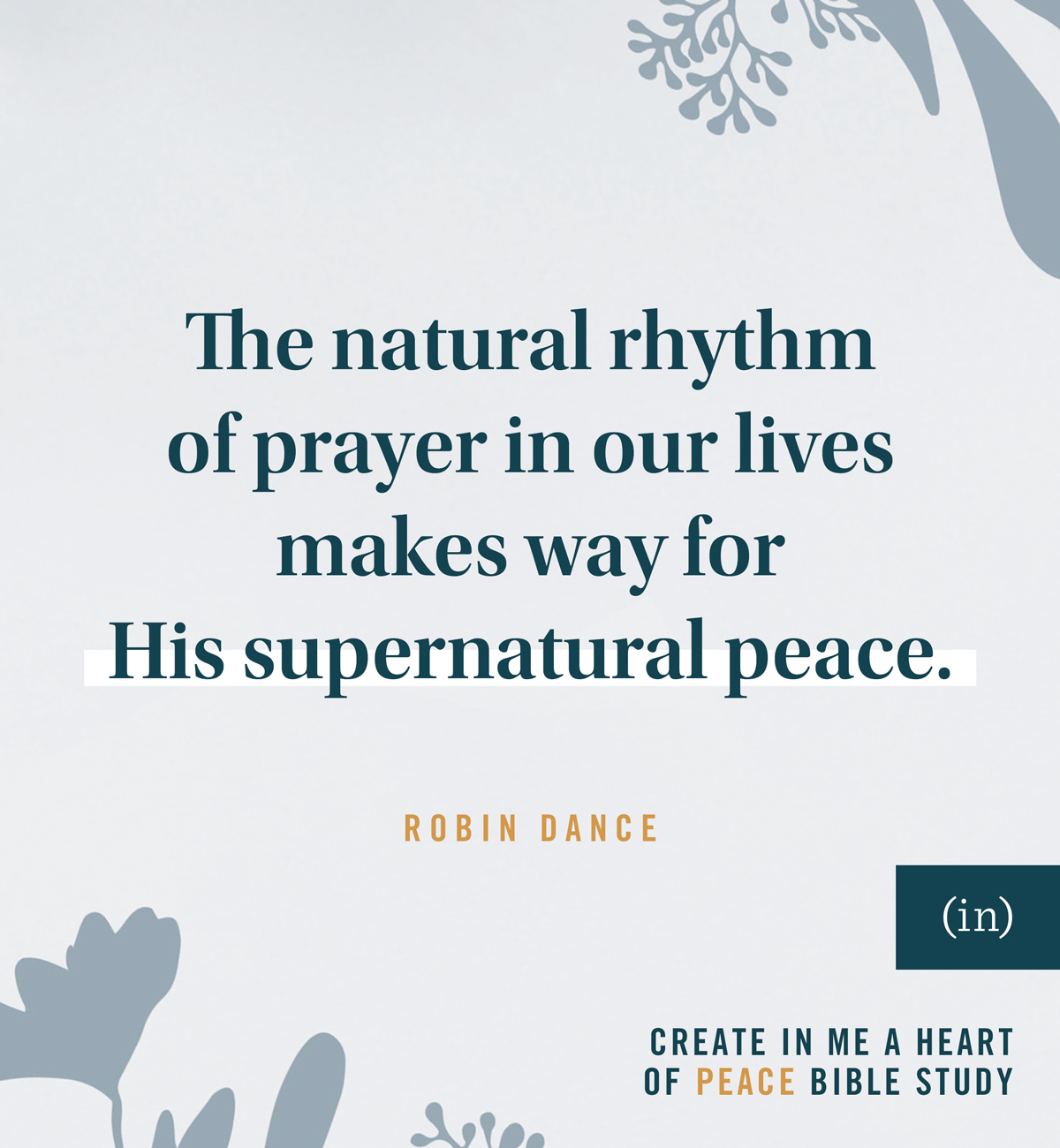 It was Valentine’s Day, but I was feeling a little blue. I was still grieving the loss of our family’s long tradition of a mother-daughter Valentine tea. What began as a thoughtful suggestion by my precious mother-in-law when my daughter Rachel was three had continued each year into Rachel’s twenties. Our tea — never limited to just tea — was a celebration of love among three generations of women. Almost as soon as one year’s celebration ended, we were already cheerfully anticipating the next year’s gathering of family and friends.

But eventually, our annual Valentine tea slipped quietly into history with little fanfare. Slowly — and yet seemingly overnight — my mother-in-law’s mind had become trapped in dementia’s snare.

Given our mother-daughter tradition, I had long before stopped viewing Valentine’s Day as a strictly romantic observance. Consequently, my husband was off the hook for lavishing me with flowers or chocolate. Still, ever a words-of-encouragement girl, I always treasured his cards. Now, with my former tradition sidelined, my focus shifted back toward him. How might we celebrate?

Neither of us was interested in going out to a crowded restaurant, so we planned a simple steak dinner at home. Spinach salad with berries and balsamic dressing, baked potatoes with all the fixings, a filet for me, and a ribeye for him. Tad can grill a steak like nobody’s business, and I was already smacking my lips in anticipation. Until I remembered our grill was broken. The part we needed for the repair hadn’t yet arrived.

Undeterred, I changed up our menu. I’d stir-fry a sirloin the way my father had when I was little, with lots of black pepper and a pile of sliced onions. It wasn’t Tad’s favorite, but it was still steak, and for me it held a sweet association with my childhood.

The first hint something was wrong came shortly after dinner. My husband complained about indigestion, an issue he seldom experiences. He just as quickly brushed it off, attributing whatever was going on to taking over-the-counter cold meds earlier in the day. We resumed our movie watching (I’m the fortunate wife who’s married to a guy who likes a good Meg Ryan / Tom Hanks rom-com), but a while later I noticed him holding his upper arm.

“Does your left arm hurt?!” I blurted.

“A little, but it comes and goes,” he admitted, minimizing his own worries but having little effect on mine.

“YOU’RE HAVING A HEART ATTACK!” I shrieked, flinging open my laptop to search “cardiac arrest symptoms.” He insisted he was fine and scoffed at Dr. Google’s credentials. I countered that he was not fine and we needed to go to the ER. My pleas to seek medical attention were about as effective as his attempts to dismiss my concerns.

It was understandable that he wasn’t taking this seriously. Under fifty and in good health, he had no family history of heart disease. Was I unreasonable for jumping to conclusions?

After the movie, I crawled into bed, still unsettled and whispering a looping prayer. Please keep Tad safe, give us Your wisdom, prompt us to act if needed. Somehow, I drifted to sleep.

You might say I won the argument when at 3:30 a.m. we were on our way to the emergency room. Barely an hour later, our suspicions were confirmed. The cardiologist on call swished back the privacy curtain, mounted a stool, swiveled to face us, drew a deep breath, and delivered the news. Though he couldn’t be sure exactly what had happened until further testing, the lab results pointed to a “cardiac event,” a nice way of telling us my husband had experienced a heart attack.

It felt like we were watching a movie. Or somebody else’s life. This wasn’t the kind of thing that happened to us.

That is, until it did.

I felt like we were in the eye of a hurricane. An inexplicable calm surrounded my husband and me, and I wondered when the backside of the storm would whip around and lash us to pieces.

As the medical staff tended to Tad, my natural reflex was to pray. This was no atheist-in-a-foxhole moment. I knew how badly I — we — needed God’s presence to face the next few hours. And I knew beyond shadows and doubts that He was with us because the peace He promises in Philippians 4:6–7 was exactly what we were experiencing: “Don’t worry about anything, but in everything, through prayer and petition with thanksgiving, present your requests to God. And the peace of God, which surpasses all understanding, will guard your hearts and minds in Christ Jesus.”

Peace that surpasses all understanding.

At the first chance I got, I enlisted a legion of prayer warriors, inviting family and friends to battle with us. What they offered through God’s Word, their own words of encouragement, and prayer were weapons of heavenly proportion.

It astounded me, really, how calm both Tad and I remained as we learned more about what had already happened and was yet to take place. Paul’s words in Philippians 4:9 contain the key: “Do what you have learned and received and heard from me, and seen in me, and the God of peace will be with you.”

For most of our lives, Tad and I have attended church; we’ve studied the Bible in group settings and on our own. We’ve learned, received, and heard from Jesus through Scripture and in sound teaching.

So when a life-threatening scenario played out in front of us, we didn’t resort to prayer out of panic or fear; we responded in faithfulness with an already established practice. Praying united us with God and ushered His presence into the midst of our circumstances, and then His peace—a peace that doesn’t begin to make sense—guarded our hearts and minds.

God always delivers what He promises. The natural rhythm of prayer in our lives makes way for His supernatural peace.

Not just on Valentine’s Day but 365 days a year.

This story was written by Robin Dance, as published in the Create in Me a Heart of Peace Bible study. 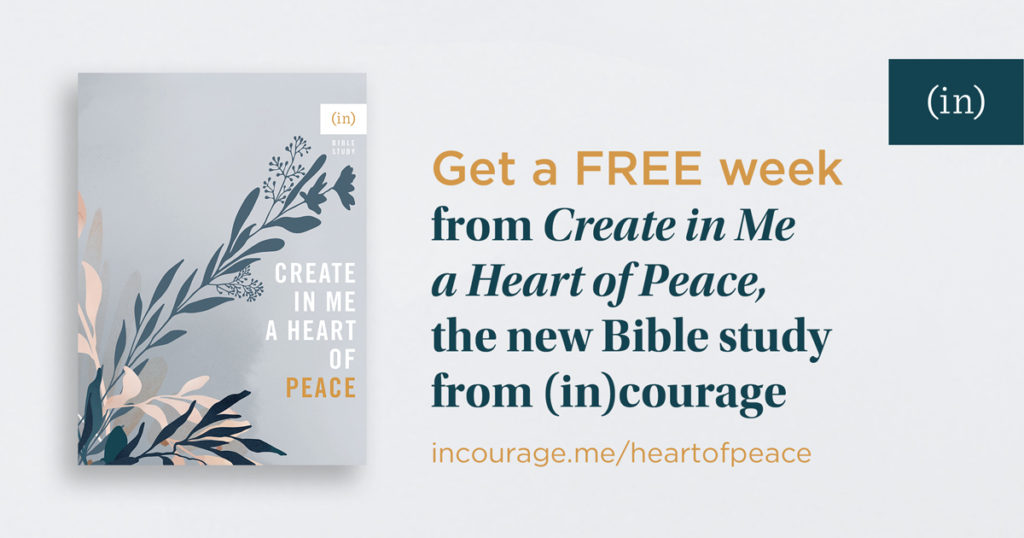 What a powerful story of peace from the new (in)courage Bible Study, Create in Me a Heart of Peace, available now for preorder. With stories like Robin’s woven together with Scripture study by Becky Keife, our prayer is that this Bible study will help you experience the real peace God offers each one of us.

Create in Me a Heart of Peace releases August 30th! Sign up below to get a FREE full week of Bible study from Heart of Peace, and preorder your copy today! And stay tuned for info about an interactive online Bible study coming this fall!

Get your FREE week of Bible Study!

Signing up will get you the free week and occasional emails from (in)courage. You can opt out at any time.

The natural rhythm of prayer in our lives makes way for His supernatural peace. -@robindance: